The mark of anything well-made is found in the details, and when it comes to geeky conferences for designers and developers, organizers are coming up with geeky new ways to spice up the offline event experience.

Let me first say that Gravatars, or globally recognized avatars, should be a staple in every social network or web app that lets uses upload avatars, because why upload one everywhere when it can be pulled from a centralized location?

Now combine Gravatar with sister application WordPress, specifically its conference WordCamp, and you’ve got brilliant automated way to print photos on conference badges. The best part is you can download the source code! 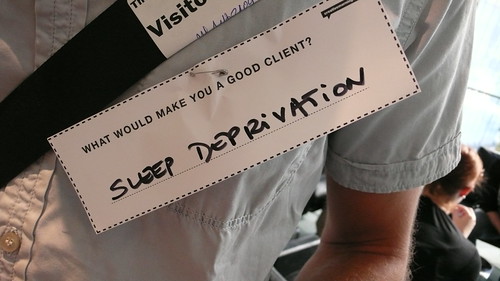 This one’s not so high-tech, but a neat little idea nonetheless, especially for smaller, more frequent gatherings such as Creative Mornings. In place of names on the nametags, participants have to fill in the blank with an answer to a certain question.

Past sessions have asked questions like “What would you like to redesign?”, “What can you teach me?”, “What would you do if you had your own storefront?”, and “What would make you a good client?” Cheap, easy, and an instant icebreaker. With the theme of dConstruct 2009 being Designing for Tomorrow, it makes total sense to come up with a Time Capsule competition, where the best entry wins free passes including hotel accommodations and a seat at the speakers dinner.

The question is simple: “What do you see that you would like to preserve for the future?” but it also underscores how important understanding the past and present is in order to build for the future. Especially when it comes to the Web. For such a massive event as the South By Southwest (SXSW) Conferences and Festivals, tapping into the wisdom of the masses makes sense. Not only does the SXSW PanelPicker increase interactivity by letting the participants vote for the talks that will go live, but it also builds extra buzz as the speakers themselves campaign for their own panels. 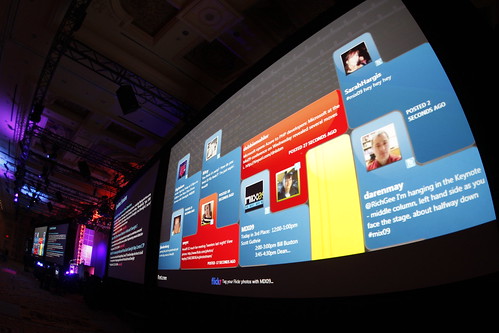 These days everybody is contributing to the coverage of any one event, and it’s even more awesome to experience that collaboration during instead of after the fact. Mashups such as Flotzam grabs streams from Facebook, Flickr, YouTube, Digg, Twitter, and the blogosphere. This one looks especially nice with the Tetris skin, which was originally built for Microsoft conference MIX09. @HelloApp, which debuts at the Future of Web Apps – London 2009, lets conference-goers meet new people via Twitter. First you tag yourself during check-in, earn badges and points for meeting new people and completing certain tasks, and browse the seating chart according to professional background (design, development, PHP, Rails).

A perfect blend of socializing and tweeting at the same time. Read how Carsonified created it.

Got a great conference idea already executed, or still brewing? The moral of the story here: don’t leave your geekiness behind when you go offline. Embrace it, because it makes things a hell of a lot more interesting.