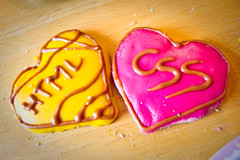 Round one: logo vs. title inside <h1>

I like that The h1 Debate was created to tackle a very specific issue in HTML that affects standardistas and search marketers alike. It asks the question what should go inside an <h1> tag, a logo or page name?, then you cast a vote by tweeting.

I expect lot more discussion than that, though; a poll is not enough. How about answering this question: should the <h1> tag appear exactly once on a webpage? For the record, Molly Holzschlag disagrees:

@fineartdavid it is SEO folks who IMO started the “only 1 h1”. I see cases of multiple h1 use such as in projection media: h1=slide header 1

That’s comforting for me to hear, but it might not be for you. But don’t take it as gospel—unless you consider Molly as god! If you’re an SEO guy and have some other god, then by all means. 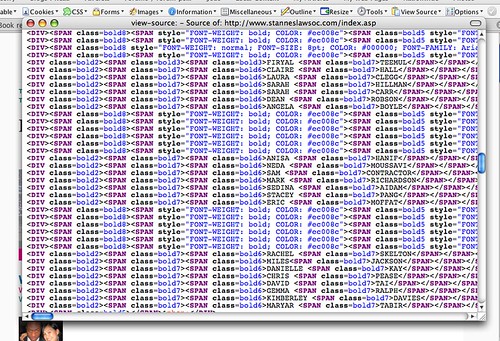 If you squint long enough, you'll see a dog. And a rabbit.

The h1 Debate reminds me of a recent post at Devlounge that condemns generic CSS classes. Sure, separation of content and presentation is supposed to make webpages more efficient and future-proof, but if you avoid using unsemantic names like “left”, “right”, “center” and end up with convoluted markup, are you really writing sensible HTML? You have a choice between being purist and being practical. As Simon Collinson says:

Leaving the h1 debate now. I do it my way for reasons I believe are common sense. The day there is one way to build websites I will quit.

Which one are you?

Round three: CSS vs. tables (again?) 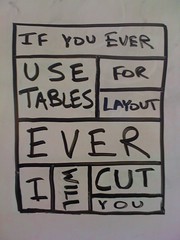 This is exactly what iamelgringo is talking about.

And for the nth time this millennium, it’s CSS vs. tables all over again. Apparently the case against tables is not strong enough…

CSS is really cool. It is useful for a lot of things. The basic idea of separating content from presentation is sound. But when it comes to layout, the design of CSS is fundamentally flawed. Use tables instead.

…or maybe too strong:

So I don’t ever want to read how web designers who don’t use pure CSS in their layouts are lazy, stupid, don’t care about their craft, backwards or don’t bathe properly. Never again. People who post such things online are heretofore to be known as CSS Trolls and are to be banished from the internets for all time. Begone yea vile fiends!

I completely agree with Simon in that there is not one way to build websites. That’s the beauty of it. Now I won’t go so far as say that we should all go back to tables. I’m somewhat disappointed it’s still an issue but I understand where these people are coming from. Ron Garret is giving up, but iamelgringo is not, and is only pointing out that (1) the biggest websites out there still use tables and (2) the purists (“trolls”) give CSS a bad rap.

Now I won’t be swayed by the source code on Google.com as I don’t think it matters. Does it matter to you?

The winners? It’s your call

What are your priorities? Web standards? SEO? Efficiency? A clear conscience? Sanity? You don’t have to be a purist or a pragmatist all the time, and shifting gears on each project doesn’t mean a sellout either. List those down and rank them based on your needs and your client’s. Then code accordingly.