Having lived in several different countries and towns, public transport always has been a constant in my life and so have subway/tube maps. First time I arrived in London I was surprised how easy it was to navigate the London Underground Map, which in this form first was released in 1933. 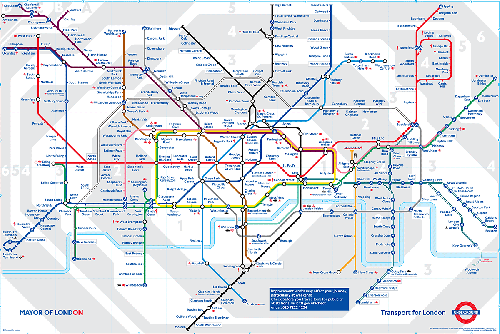 The London Tube Map is a design classic and worldwide recognized as a symbol for London. When Harry Beck designed the map in it’s new format, he changed the until then standard geographical concept and decided only to implement the railway topology and not the geographical situation of London. Geographically correct the map would look like this. At the same time every non-underground clutter was removed and London had become a symmetrical pattern of straight and 45 degrees lines.
Although there are minor geographical distortions in the official London Tube Map, it’s beauty lays in the symmetry, the usage of equally spaced out distance between stations, the 45 degree angles and the usage of adequate whitespace. Even though the map features many subway stations (275) it is perfectly readable, even at smaller pocket sizes.

Becks’s style has often been imitated, been adapted by many other companies/towns, but never has anyone reached the same level of popularity with a tube map as Becks has with his London map. Both Amsterdam (NL), who even credit the London Transprt Museum on their map, and Tokyo have the same concept and perfectly manage it to ruin a great principle with clutter. Other towns, such as Paris, make their map unreadable with too much of text and too little contrast or add visual noise to an otherwise outstanding map such as Moscow.

Maybe I’ve lived too long in the UK, but the London Tube Map is one of the most brilliant designs I’ve ever seen and used.