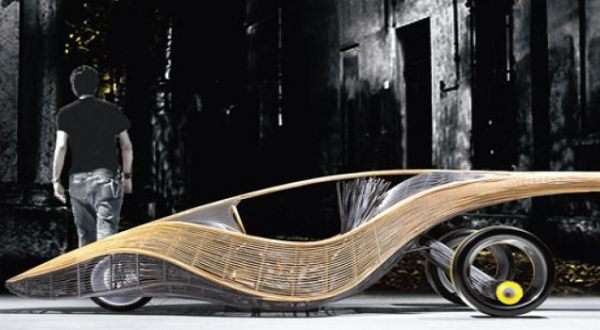 As people become more and more conscious about climate change and the other effects of fossil fuels on the environment, the demand for more environmentally-friendly automobiles also rises. The rise in distribution and sales of hybrid cars is testament to this, and it is only expected to increase further in the near future. In fact, the newer models are expected to be even more eco-friendly than ever before.

With this, one may be right to expect the new generation of cars to look more like capsules taken straight out of a sci-flick, made of fiberglass or the latest in lightweight, durable, and synthetic materials. However, world-renowned furniture maker Kevin Cobonpue seems to have a different vision altogether. He has, for a moment, veered away from his usual home furnishings to create one of the most interesting cars to date: the Phoenix car.

His masterpiece, which was featured at an Italian exhibition, bears a striking resemblance to a bird, which is probably partly where it gets its name. However, it is not just its streamlined appearance which is striking, but also the materials from which it was made. Cobonpue made use of his usual materials, which he sources from his native country, the Philippines, to come up with this car. This is mostly composed of rattan fiber and bamboo. It also has some parts made from carbon fiber as well as steel.

Many may not think this car to be suitable for the distribution and use of consumers, especially since its present form makes it a bit too biodegradable for regular driving. However, it does present us with a new way of looking at things and opens the door for the many possibilities we have yet to uncover, especially when it comes to combining design, function, and sustainability. Not surprisingly, the car was one of the highlights of the exhibit in which it appeared, which aimed to focus on both imagination and innovation.

And these two things, Cobonpue has a lot of. He is not only a successful furniture designer and car enthusiast – he is also a man of vision. He believes that since people replace their automobiles every few years anyway, we should start considering the idea of producing biodegradable shells which can easily be replaced and recycled. This may seem like a crazy idea for now, but who knows? The Phoenix and its future offspring may just take flight sooner than we think.