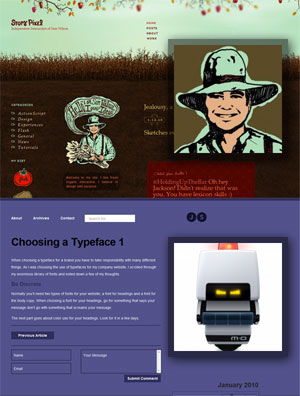 So I was reading Elliot Jay Stocks’s post on the Apple tablet and noticed all the fancy gravatars his commenters had (maybe because they were not as small as the ones in the blogs I frequent). One in particularl that caught my eye was Jeremy Swinnen‘s and made me wonder if, like Sam Wilson‘s, it was a condensed version of his website and/or brand. I visited his site and turns out I was wrong.

Avatars are usually faces (photographs, caricatures, etc.) or logos, because that’s the most straightforward way to advertise yourself. But why not try something that remind people of your own website? Chances are that’s the first thing they do after reading your comment: check out who you are via your homepage.

If the logo in your avatar is featured prominently, which is probably the case anyway, then great. But I feel a disconnect when visiting a site that has no visual ties to the avatar associated with it. And putting a spin in your branding by using more than your logo in an avatar is a worthy challenge.

Sure, we also associate people with their respective URLs, but aren’t avatars the proverbial peacock’s feathers, the smoke and mirrors, the flashing neon sign—to lure people in, establish a connection, and possibly seal the deal on whatever it is you’re “selling”?

If you’re not choosing the most effective way to bring people over from Mr. Stocks’s site, then you could be missing out.