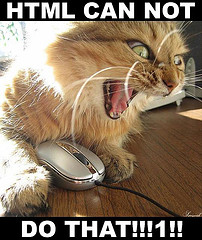 Harry Roberts a.k.a. CSS Wizardry tweeted a certain tutorial by CSS Aid (page is dead now), which was enclosed with four little words (“Good lord, wrong much?”) that echoed such alarming levels of horror and shock (considering he tweets about poor examples of HTML/CSS code everyday), that I had to check it out.

First, the tutorial was entitled “Tables Without Tables”. If that doesn’t trigger warning bells in your head, then consider the opening paragraph:

It’s the year 2009, CSS rendering has vastly improved from when it was released, so there is no reason for any website to use tables as layouts. Although you can ditch the table tag when it comes to layouts, you may someday need to use it for what it was made for…or do you? I am going to show you an easy way to make a table with a simple unordered list.

No. Just no. Yes, <table>-based layouts are considered wrong because HTML is supposed to properly represent data. Lists should be lists. Tables should be tables. Layouts that look like tables (grids) can be done in CSS. That’s semantics, the core principle of web standards.

But avoiding the use of <table>s at all costs is no better. Perhaps it’s even worse, since it demonstrates not only ignorance but false expertise, feigning arrogance over an HTML element that has been shuddered at because of its misuse and abuse.

The page has gone down in between the time that I read the tweet and wrote this post. Fortunately the forum thread that seems to be the source of the link is still up, and shows us the author’s reasoning for writing the tutorial. Take post #7:

Because I hate the <table> tag

Is this the extreme dark side of web standards, where we’ve been conditioned to hate <table>s so much that we can’t even think to use them for what they were meant for anymore? A sad, sad turn for us all.

By post #15 he’s already backed down and promises not to use the experiment for real-life cases, but this summarizes things nicely:

It’s a pointless experiment though. It’d be like experimenting making a house out of tampons. Doable but just plain wrong.

It’s bad enough that we have to deal with preaching proper web standards, dropping crusty old browsers from, and adding newfangled technologies to our web design arsenal. Let’s not get sidetracked by punishing HTML elements by twising them into things they weren’t meant to be.