Or as a like to call it: podcasts that have caught my eye in the past week or so. And they differ in several ways, so there’s sure to be something for everybody. Take your pick:

Confession: It took me a while to realize that this podcast is actually the previously-named You Suck at Web Design, relaunched as a new brand with a new site design. This show isn’t so much a bag of tricks on web design as it is a quirky, personal storybook told by Matthew D. Jordan, but still a must-listen. 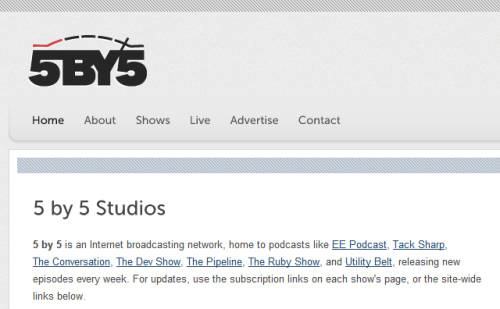 This is not just one but seven shows tackling different topics, from photography to Ruby programming, founded just last year by Dan Benjamin. I love the idea of a whole network of shows about the internet, on the internet, and here we have a whole suite for people who make websites. I can think of few things better than that. More networks and more topics, perhaps?

In light of the “circuses” happening in both the Hollywood late night talk show circuit and the web working groups, standardista slash comic strip creator Kyle Weems aka CSSquirrel announced this:

I am in the process of devising a “late night” talk show that the Squirrel will host, featuring interviews with cartoon representations of various web designers/developers/standardistas. It’ll draw from the mighty traditions of the Tonight Show, The Daily Show and Space Ghost: Coast to Coast, and in theory will be a plug-in free experience brought to you in part by HTML5, JavaScript and vector tree-climbing rodents.

Check out the podcast over at SitePoint, titled HTML5 is a beautiful mess:

The podcast touches on that matter, and spins out to the state of the actual implementation of HTML5 itself, whether there’s a challenge in getting designers and developers to start using it, the issues of accessibility in <canvas>, and how delightful it’d be to move past plugins.

Truthfully, I’m trying to avoid getting caught in the sticky details of how HTML5 is developing at the moment because it only adds to the anxiety (isn’t stressing over Internet Explorer enough?) and diminishes hope (we’re supposed to be moving forward with these technologies already). But it also helps to stay realistic not just idealistic, and drawing back the curtain on how the working groups are actually working on the HTML5 standard is a good way to do that.