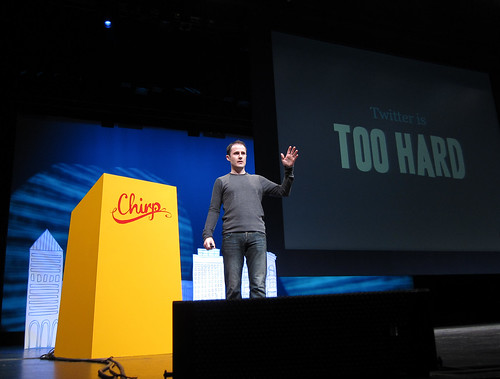 Amidst all the exciting and controversial new directions Twitter is taking since they’ve been announced at the Chirp conference, one stands out: Ev Williams admitting that “Twitter is too hard too use”, even mentioning that the phrase “I don’t get Twitter” is the second suggested search in Google.

After all these years of the pundits identifying Twitter’s strength and eureka moment to be its simplicity, Ev’s statement says a lot about the company. They could have skipped over this detail or worded it in some other way, but talked about it anyway. Sincerely and transparently.

We’ve known this for a long time, but it was growing too fast for us to address these issues.

There are several lessons rolled in here. Despite all of Twitter’s growth in usage and features, they still don’t want to drop the ball on simplicity even if other products probably would have, because they can afford to.

But simplicity doesn’t only mean keeping the number of features at a minimum; it also means being intelligent enough to anticipate what users need. The way Twitter is built makes it into “different things for different people”—hence the explosion of 3rd-party apps and the creation of its own jargon. Retweeting, hashtags, trending topics, recommended users, and lists were all created arbitrarily by the community later on integrated as real features. Now the company is pushing further in location awareness, mobile, infrastructure, and APIs.

As long as there’s this open dialogue among the founders, the users, and all the developers, Twitter will remain as inspiring and innovative as ever.