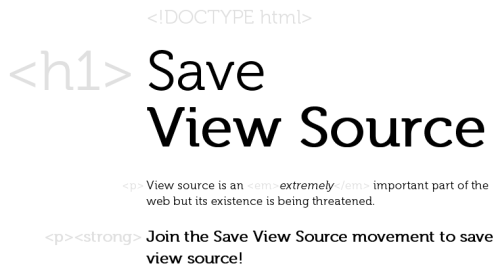 According to Ajaxian, the beloved tradition of learning by peeking at someone else’s source code is on the brink of extinction. Because Google is rewarding websites that load faster, people will stop at nothing to look good in the big G’s eyes, including code compression and more notably, obfuscation. This renders View Source useless.

While I feel it’s too early to call doomsday on View Source because of such speculation, like many I feel protective over it. It’s no surprise then that the Save View Source movement has been formed this early. The discussion is sparse, but Alex Russell elegantly explains why View Source matters, also reminding me why I love developing on the Web:

View-source provides a powerful catalyst to creating a culture of shared learning and learning-by-doing, which in turn helps formulate a mental model of the relationship between input and output faster. Web developers get started by taking some code, pasting it into a file, saving, loading it in a browser and hitting ctrl-r. Web developers switch between editor and browser between even the most minor changes. This is a stark contrast with technologies that impose a compilation step where the process of seeing what was done requires an intermediate step. In other words, immediacy of output helps build an understanding of how the system will behave, and ctrl-r becomes a seductive and productive way for developers to accelerate their learning in the copy-paste-tweak loop.

Even in compiling languages people learn better by looking at example code, but the culture of open learning can be felt strongest on the Web. Ajaxian posts a follow-up, in which I couldn’t agree more with this:

I personally feel like the ability to view source fit in perfectly with the culture of the Web, and was especially important early on. I am willing to bet that we have all learned from the notion of view source.

The freedom of access to tons of information on the Web is what it all boils down to. View Source is a sturdy consequence of that. It seems wrong to compare performance versus learning, but between those two, learning should prevail.

Then again, who can stand in the way of site owners desperate to turn up traffic and profit? Sounds like standards versus SEO all over again. What do you think—is the Save View Source movement an overreaction or a preemptive strike?