Tumblr is no longer just the home of reblogged pictures, quotes, music, videos, and journal entries of friends you follow; it’s also gaining favor with the more discerning content creators in the design and technology circles, turning it into a truly professional publishing platform. This phenomenon is thanks to its relatively easy customization while keeping its interface decidedly simple.

My question is, if Tumblr’s audience is becoming more mature, should it shift from its dead-simple appeal and grow up too? David Yeiser prefers its current approach:

What’s neat about Tumblr is it’s not only a great publishing platform but a great tool for content consumption. […] as self-publishing has changed to shorter forms and varied media the traditional feed reader has become obsolete. I shouldn’t have to click a title of a post to read a quote. […] I think the way Tumblr aggregates and displays blog posts is the future of feed readers. Though I’m not aware of any standalone readers that take this approach.

Personally, I disagree. I follow a lot of people (and non-people) on Tumblr, producing remarkably varied content genres (e.g. XKCD Explained, 53 Weeks of UX, Sweet Home Style) with no way of filtering which ones I’d like to view at a time. Infinite scrolling in the dashboard can only take you so far in browsing ease.

Unwieldy content consumption is a familiar problem experienced on Twitter and Facebook, and by people who want more options, more control. Except there are now methods of dealing them on those sites. It’s even a big business for third party companies. On Tumblr, that remains to be seen.

Dashboard filtering options would be a welcome addition to the site. The reason is that “following” is a one-size-fits-all option when the truth is we need many. 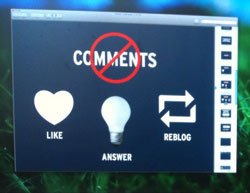 And there lies the rub with a hosted platform, as well as platform that caters to simplicity first and foremost. Notice that as the concept of feed reading, trackbacking, and commenting are abstracted, if not replaced with Tumblr’s own conventions of dashboard reading, reblogging, liking, answering, one is forced to adhere to a closed set of standards inside its community. For a community that’s got such a wealth of content, consuming and sharing and communicating through that content but with limiting, non-standard methods is a turn off. If I link to a Tumblr post from a non-Tumblr site, will the owner of that tumblelog even know that I did?

Again, all of this wouldn’t be so bad if there were more options available, even as premium features. Right now, there aren’t.

What should Tumblr do? Should it go the WordPress.org and Identi.ca route and provide an open, self-hosted platform? Should it take some notes from the old-but-still-strong LiveJournal? (In some ways their user bases are the same.) Should it push its API more aggressively? Should we just wait and see what they’re up to, or accept that it’s really just a different culture from what we’re accustomed to?

As someone who’s enjoyed a lot of great content on Tumblr and is tempted to migrate her personal blog over there, there are a glaring number of things holding me back.