New year, new decade. But we still haven’t gotten past everything Web 2.0. We’re still dealing with the consequences of the social media revolution. The question is, which side are you on? 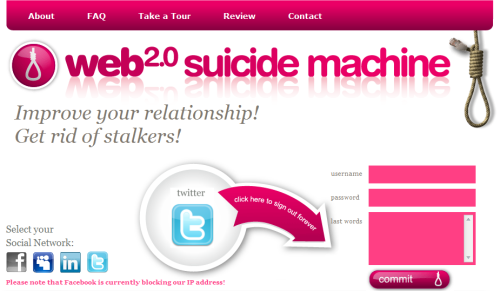 We’ve seen people dumping Facebook and still not getting the Twitter mania, but here’s something pretty recent: the Web 2.0 Suicide Machine is making the meme rounds for those who suffer from social networking overexposure.

Most of the time we just hop on the bandwagon, publish the smallest details of our lives with abandon, and regret our actions only when it’s too late. Sites like My Parents Joined Facebook and Lamebook capitalize on those slip-ups, and we’ve all heard stories of people getting fired for something they posted online. A clean break from it all could be the answer. Or an exaggeration.

Interestingly though, Facebook has blocked the Suicide Machine. Thanks for playing!

Again, this isn’t really a new phenomenon, but not many people are looking that far ahead. After all, who knows what the Web will be like in five to ten years. If domain names will still be the way to access websites.

Most of us probably lie in the middle and won’t think to axe their accounts or be so protective of their online identities as though they were real estate. Even if your new year’s resolution for social networking isn’t anything drastic, it’s still important to stay on top of your privacy concerns and online persona. Have you tweaked Facebook’s Privacy Settings yet? How about all the authorized third-party apps that have access to your Twitter account? Do you Google yourself every once in a while to see how other people find and paint a picture of you?